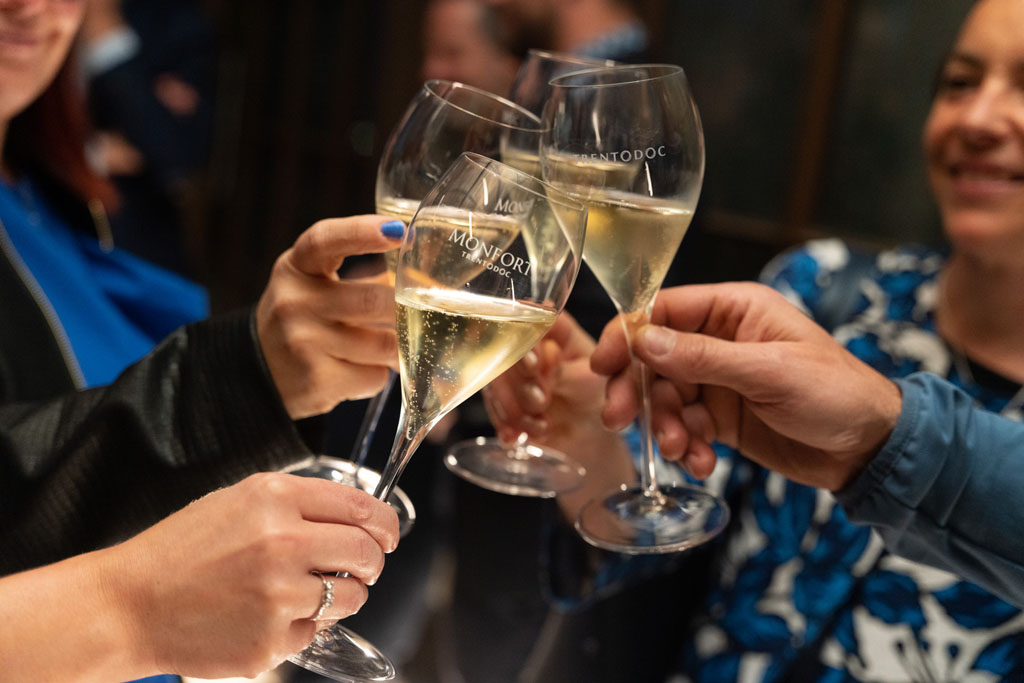 One of the most exclusive and refined aperitifs of the Trentodoc Festiva, the Blu Trentodoc Monfort Night, was held inside the greenhouse of the Bortolotti Garden known as Giardino dei Ciucioi. It was an evening full of atmosphere among the illuminated terraces of the garden, lulled by the light of an almost full moon. An important event to give prestige to the line of long aged “Le Général” and to present to the public the latest wine: Le Général Blanc. The choice of venue elevated the power of the two Trento doc Monfort wines, a place dense with magic and verticality, of man’s elevation to the heights.

The Simoni family, through Federico‘s words, wanted to retrace the founding stages of the company’s history and those that have marked Monfort’s sparkling wine history. In 1985, Lorenzo together with the then winemaker Dario Tonazzolli, laid the first bottles of metodo classico, then not yet Trento Doc. An experiment born of dream and ambition, of foresight and of a deep knowledge of the land. The last decades have been devoted to more focused experiments toward long aging, and the party was an opportunity to present the results.

Tension, length, the ultimate expression of elegance, a tribute to the Chardonnay of the Cembra Valley, Le Général Blanc Trento Doc Riserva brut naturé has taken its place alongside Le Général Dallemagne Trento Doc Riserva extra brut. Two different characters and two precise identities, but both are intimately connected by our enological hand and Trentino terroir.

The aperitif was accompanied by the music of the great maestro Davide Lorenzato, a young musician of Trentino origin but who has played in the most important theaters around the world. The notes of his piano accompanied the audience inside sound harmonies from different eras, guided with class and elegance by his hands. The theatricality of the lights, the voice that narrated Susanna Tamaro’s verses, were the result of the creative flair of Miscele d’Aria.

Nunu’s bistrot, a young and dynamic business in the center of Trento, oversaw the preparation of the finger foods, indulging the taste traits of both Reserves and paying special attention to the venue that hosted the event. Flowers, essences, aromas extremely sought after and cared for on the plate.

An aperitif that will remain etched in the minds and hearts of those who attended, the feeling of having been part of something unique and intimate.